3 Most Common Problems with Hotspot Shield--updated 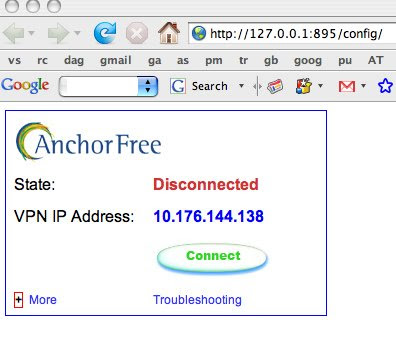 [This article has been recommended on Yahoo Malaysia Answers, and Mento (User Seagoon)]

UPDATE 5/7/09: Hulu has begun detecting and blocking proxy/vpn access to their video streams. Read my newest post for a solution.
Important: Remember to download the latest version of hotspot shield--it doesn't update on its own. I've been having some problems with the program as of late and when I downloaded the newest update, I realized they had changed the advertising system--it's now more customized. It's now working perfectly again. If you're having trouble installing Hotspot Shield and get the "an error occurred installing the tap vpn device driver" message then click here to resolve it.

Though a progressively popular option for those outside the US wanting to peruse network TV shows via Hulu or Fancast, Hotspot Shield (HSS) is not without its bugs/faults. In fact, more and more individuals commonly ask me why their connection only works intermittently or, in some cases, not at all.

Here is snippet of an email from Catherine in Toronto:

I have come across your wonderful "hack" for Hulu and Fancast in . Thank you very much for the tip. However, my friend is having problems connecting to Hotspot (obtaining the IP address) and I was wondering if you know why that might be. Her ISP is (cable modem), plus she is far from WiFi hotspots in the city (unlike me - since I live practically downtown). I was trying to find an answer to that but so far could not locate anything.

And here's an excerpt from the email response I wrote back to Catherine:

1. One of the most common is that individuals use hotspot shield too much (i.e., they download more than 5GB worth of content using the free service) and thus the company, anchorfree, logs the initial static IP of the user and blocks them from further use of the application until the next month as there is a monthly limit (I've heard ranges from 5-10GB). Theoretically, (since this has not happened to me before), those who subscribe to their ISP via a dynamic IP address can just release and renew their IP current address and download hotspot shield again. Since the service does not require any signup or logon, it will simply assume this new IP to be a new user, granting another 5GB of bandwith. Theoretically.

2. However, if she has never been able to connect to the service, there may some other issues with the ISP (I use Telus in and so am not sure if blocks certain web apps in ).

3. Or, it may be as simple as changing the operating system's date and time in the BIOS setup (when she starts up her pc).

These are some of the possible reasons it might not be working for her. Trying out other VPNs might be useful as well to judge whether it is a web-specfic issues or ISP (just google free VPNs).

To get view streaming video on NBC and ABC (requires some other settings tweaks after hotspot shield. Check out blogger Raymond.cc's fairly new article about how to fix HSS' pulling options and daemon start error problems.

Note: Lifehacker innaccurately depicts HSS as a Windows-Only download where, in fact, it is cross platform. If you happen to be blessed by Gates and Jobs then try the free application on both platforms just to be sure it's not a specific computer's issue.