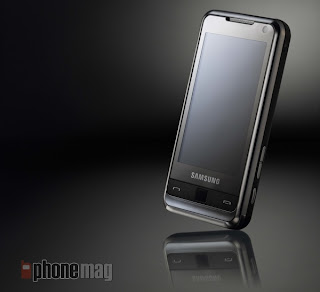 
I just purchased the vaunted Samsung Omnia (a.k.a. i900) in Singapore a couple days ago for a small fortune. So far, I've played around with the camera, skype, photo-taking (though haven't been able to geo-tag the pics yet), mp3 and video player, and few other functions. Here are the specs for the device:

A couple of initial impressions:

WQVGA Widescreen
Samsung definitely made a controversial decision by making the Omnia with a WQVGA screen (240x400). It's much too long in my opinion. So much so that some of my programs crash upon loading. Skype, for example was made for more conventional Windows Mobile screen sizes, and often drops calls or just doesn't start at all, requiring a soft reset. Though some would think that the extra wide screen on the Omnia provides for a better wide-screen divx movie experience, the truth is, there's another drawback. The colors are limited to only 65k. So, what I initially thought were video artefacts on in the video were actually the limitations of Omnia.

Web pages, on the other hand, look great. The broswer interface is very similiar to that of the Wii's (I guess because both are made by Opera). Zooming in and out isn't exactly intuitive, but after a little learning, my browsing experience is pretty on par with other mobile devices, if not much better because of the extra-wide screen. The color limitation doesn't affect the browsing experience much.

Wifi
I've been having quite a few issues with the wifi in the Omnia. Often times, I turn on the cell phone, and fire up a browser only to find that the wifi has turned itself off. This is quite annoying since I have to go back to the Wireless Manager settings to turn the Wifi back on. I'm not sure if this has something to do with a timeout option that I have not discovered whereby Wifi is switched off after it can't find a network for a certain time. Or it could be some bug in the software. Other times, the wifi works for a short period of time and then can't find the network even though I'm less than 5 feet from the wireless router. (Update 8/26/08: Haven't had many of these problems returning, click here for more information on Samsung Omnia Wifi problems).

Touchwiz UI, Windows Mobile OS Environment
I haven't played around with the HTC Touch Diamond which, most cell phone aficionados will says that it is the most comparable device to the Samsung Omnia aside from the Apple Iphone since the later doesn't run Windows Mobile OS. But from what I've heard, the Touch Diamond did not intergrate their TouchFLO technology (3D animated user interface) well. Instead, the company under-powered the hardware so much so that the experience on the cell is quite laggy. Nevertheless, I don't find that Samsung Omnia to be the snappy, either. The main drawback is in the accelerometer function. With swift rotation of the device by hand, the Omnia switches from portrait to landscape mode. Only problem is the graphical animation forces the rotation to shrink the screen before zooming back out into the appropriate mode. This slows things down drastically and I can only hope Samsung will add an option to turn off the animation in future software updates.

The built-in Windows mobile software has it's pros and cons. Pros, mostly due to the fact that it's a tried and true operating system for cellphones. There's plenty of support and software built around the platform providing a wealth of third-party applications to the user. However, the one thing that was majorly overlooked (perhaps by both Microsoft and Samsung) is the decline of fall in the use of stylus in today's mobile phones and still include a tiny scroll bar on every window and application--this is especially tiresome since scrolling is always required due to the Omnia's resolution length in portrait view. Most people, myself included, find it much easier to use a finger for just about every function on their phone. Samsung, perhaps even noting this caveat, decided to included a stylus on a lanyard--instead of having the Omnia come equipped with the standard fare slot for the stylus. Not impressive. After a about a day of attaching the lanyard, I felt it looke a little effeminate and feared how the stylus would scratch the screen or phone body and took it off.

More reviews/comments on the phone coming up soon.