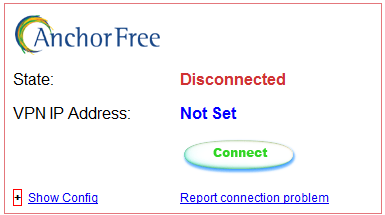 Update 7/28/09: Some users have found success combining Hotspot Shield and Ultrasurf (listed below in this article) to access Hulu.
Update 5/7/09: Hulu has begun detecting and blocking proxy/vpn access to their video streams. Read my newest post for a solution.

Many use Hotspot Shield to watch programs on Hulu and listen to music on Pandora. Some however, have noted that it's no longer working for them, either because AnchorFree has blocked their ISP's IP addresses or they get some multitude of problems with Hotspot Shield (such as Daemon Start Error, TAP VPN Installation Error). In the past, users have noted that Hotspot Shield used to block their IP once they surged past the 5GB bandwidth block. That limitation has been lifted by AnchorFree recently (users state it's 10GB now). Either way, there are plenty of other alternatives to the popular software program, which for it's many advantages still has many downfalls.

That being said, Hotspot Shield is still the absolute best free vpn software available on the market. It's a wonder how they manage to keep it free even despite the ads (which can be blocked easily). Hotspot Shield still is the fastest free vpn with loads of bandwidth and easy installation. It's a shame that not everyone in all countries and ISPs can use it. Though disappointed users should always troubleshoot their HSS configuration first before trying alternative vpn software. Here's a list of alternatives to Hotspot Shield (note: not all give US IP addresses):

1. AlwaysVPN (Free): Based off of the OpenVPN open-source vpn software project, AlwaysVPN represents the next best thing to Hotspot Shield at the moment. It Works with Linux (step-by-step directions), Vista, XP, and Mac OS X. Though it takes some time to get connected the software is currently in beta (Vista's build especially), so the programs looks less polished as compared to Hotspot Shield.

(UPDATE 2/17/09: Unfortunately, AlwaysVPN is no longer a free program; their service is now fee-based though still one of the best).

2. Ultrasurf (Free): The current version, Ultrasurf 9.1 has failed to allow flash video to be sent through connections, so one would be best served by googling the older version, 8. Nonetheless, even in comparison with Hotspot Shield, Ultrasurf boots up in microseconds--literally. There are no ads. The only tricky thing is that if you don't use Internet Explorer (which is it's default browser) you'll have to download the Firefox plugin (only other browser in works on). It's completely browser-based. Outside of the browser experience, you're still using your current ISP's IP address. That being said, Ultrasurf was created for the sole purpose of aiding third-world countries' citizens to view blocked content in the form of media. Hulu does not work well on Ultrasurf and has never worked for me (though some users claim it has on previous builds). I wouldn't be surprised if Ultrasurf rolls out a new platform that trumps HSS.

The ones listed below are not ones I'd vouch for, but have definitely heard a lot about on internet forums and other blogs. Give them a try if you'd like. Not all are free services:

Hamachi (Free): Less traditional, not nearly as useful. Hamachi involves tunneling technology which encrypts your connections with a second pc at the IP address you need (E.g., your home laptop in the United States, while you're away on vacation in Dubai). According to a Wikipedia article, "Each Hamachi client is assigned an IP address from the 5.0.0.0/8 address block".

StopMeNot (Free): Didn't work for me when watching Hulu as it's for less bandwidth-intensive applications (surfing the net, checking email, facebook), does not load flash applications. No software download required. Just go the site, and type in your URL. However, be forewarned that there are a bunch of really annoying flash-based ads (some a little more scandalous).

Witopia ($39.99/year): Apparently one of the better paid VPN service on the 'net. Though it will cost roughly $40/year. Works with Vista, XP, and Mac OSes. There's a 30-day money back guarantee so give it a try for a month and see if it works out for.

HTTP-Tunnel (Free, $5/month): Rick Forchuk on his site, Rickspicks.ca recommends using free software, HTTP-Tunnel. Unfortunately, or perhaps brilliantly, the software "negates your high-speed connection" and so the company encourages users to subscribe to its paid "high-speed fix" program for $5 per month. Users can also subscribe annually for roughly US $45 per year. There's a fairly detailed description of how to get set up with the software here.

Relakks ($5/month, $50/year): Swedish, so all prices are in Euros and IP is in Europe (presumably in Sweden). Formerly touted as the panacea to MPAA and RIAA crackdowns in online piracy and torrent downloading, Relakk's parade has dwindled as the hype has come down. Some say this is a great vpn solution, others not so much. Requires signup for free 30-day trial.