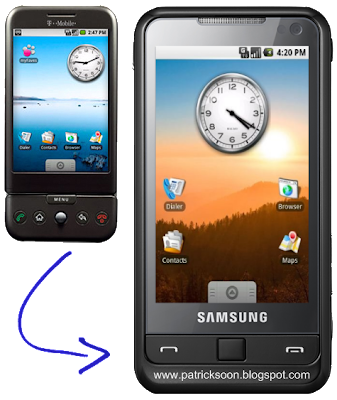 This article has been recommended by GSMSpain and OmniaTurk, and Samsung Player Addict.

Update 7/2/09: View live-action footage of the Android on the Omnia (Youtube Video)
Update 6/23/09: News flash! Ingenious programmers have successfully booted Android on the Omnia via a WM-based boot loader application. Touch screen is enabled. Within time, this could become a fully-functional ROM.

Update 5/19/09: If you're interested in working on this development as a programmer, read the posts on Andromnia forum. AndroidOmnia, another site, promises to pay upwards of $361.00 to the first programmer to port Android to the Omnia.
Samsung recently announced the delivery of a new full-touch handset (akin to the Omnia and Instinct) powered by Google's newest project, Android. With recent news of Android's unauthorized appearance on an HTC Touch handset, users had been wondering for months if some industrious computer programmer would be so inclined (and brave) to port the much-desired OS from the disappointing G1 over to the hardware-superior Omnia. The missing ingredient--an on-screen keyboard--had been missing from the operating system--until now. With Cupcake, a special update to the Android OS package and Google's early Christmas present for the open source world, the OS now operates with a portrait-mode touch keyboard, surfs the internet at higher speeds, and supports stereo bluetooth (A2DP), in addition to a plethora of other fixes.

A Matter Of Time & Hardware.
One would guess that it's only a matter of time before the Android shows up on the Omnia. There maybe be some specific challenges for the OS that may be impeding this process and thus discouraging users already comfortable with their Omnias. Current hurdles for programmers (and thus Samsung's Googlephone team) to overcome when porting Android over to the Omnia may be the unique feature sets that define the phone's all-in-one functionality. Unique program-specific talents of the Omnia's 5.1 megapixel camera, such as the auto-panoramic mode, would be lost, in addition to text-recognition for business card capture. The highest hurdle may be the phone's screen, which with an uncommon resolution (240x400) and resistive touch input present the uncharted (and unplanned) territory for the Android OS. One might wonder if Samsung would do best to exchange both hardware traits for a more compatible 320x240 display resolution and capacitive-touch input, much like that found in their popular YP-series mp3 players.

The Argument for Android.
Certainly, the Samsung Omnia deserves a better operating system. The current WM6.1 represents the outdated pda-orientated thinking in the mobile industry that has been all-but neglected since the the advent of the Iphone's touch-optimized UI. Users no longer want styli (is that a word?) with their smart phones. Instead, they want to be able to get to all the necessary functions (phone, camera, mp3 player, file explorer, etc.) without having to pin-point-press the undersized sensitive touch buttons, or revert to a stylus. That Samsung even included a tiny, almost forgotten exterior stylus instead of the traditional slide-out, tells of a breaking from traditional mobile phone design standards. One might even postulate that such a decision signifies Samsung's vision of a mobile operating system future whose interfaces will resemble that of the Iphone's. 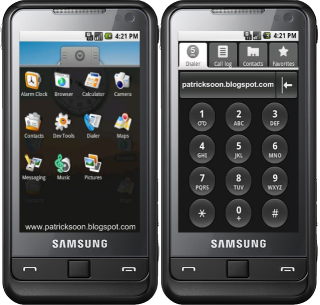 Far earlier than the second quarter of 2009, tech blogs will be gushing about Samsung's entry in into the Googlephone race. There will be spy photos, spy videos, rumors (like this article), and then some. But the Omnia community probably needn't wait that long. Chances are there will be many ways for Android to reach the Omnia as some programmer will figure out a way to port it before Samsung's Googlephone arrives. On a related note, Windows Mobile 7, which has long been touted as Microsoft's answer to Apple's Iphone is now delayed by more than a year. Tech insiders estimate that the earliest one might see the OS will be in late 2009 (which in most cases, means early 2010). Microsoft CEO, Steve Ballmer, while at the launch of the T*Omnia, the upscale Korean-variant of the Omnia i900, broke news of an intermediary OS, WM6.5, scheduled to arrive mid-2009 in lieu of WM7's delay.

In the end, whatever operating system Omnia owners choose to adopt, its future looks optimistic, varied, and extraordinarily competitive.