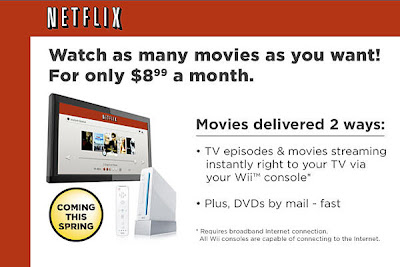 The popular market-share leader Nintendo Wii will finally be getting it's own Netflix streaming service now.

According to Netflix, the service will launch in Spring of 2010. I've just reserved my own copy of the Nintendo Wii Netflix CD (more on that below).

Hooray! I can dust off my Wii for something other than bowling, ping pong, and Mario Kart.
No one's really sure why it's taken so long for the Wii to get this service. Many postulated that it couldn't handle HD content or any streaming video of SD quality at all (though youtube videos of normal quality play on the Wii just fine). Some news outlets state that because the Wii now supports Netflix, Nintendo will soon be breaking out an HD version of it's ubiquitous console to support HD-streaming of Netflix vids as well. 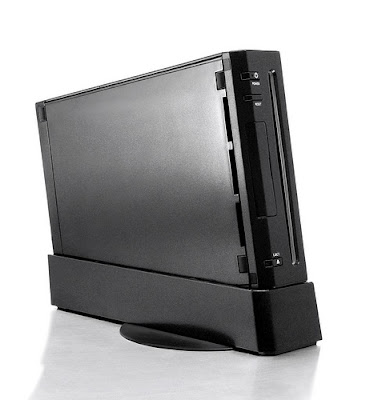 My take? It's not happening (and HD version of the Wii, that is, and not in the near future). The games were never meant to be made for an HD system (even upconverting the games might not be sufficient). The system is not meant for hardcore gaming and has never really positioned itself as a contender to the PS3 or the Xbox 360. Even the game development side of Nintendo and 3rd party studio dread making games for visually lackluster Wii. Moreover, most videos on the Netflix streaming service aren't in HD at all. Most people who use the service don't watch HD videos either.

More likely? Nintendo will create a second system to contend with the PS3 and the Xbox 360. It will be an entirely different platform, controller setup, and will support HD content. Though this may be confusing for some new users, it certain will not detract those casual gamers from purchasing a Wii and hardcore gamers (who already own a Wii probably), from purchasing the second system. Maybe.

Anyways, all that's needed is a free CD provided from Netflix for members much like that required on the PS3. And no fees (unlike the Xbox 360).

Questions: Will this cd require another system update? Will it brick homebrew? Can't wait to find out.