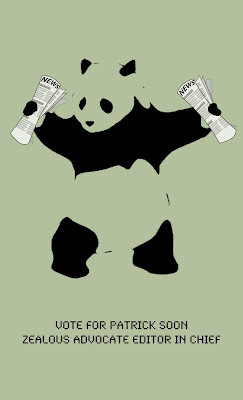 Many people at my school call me "Panda". Not all, but many. I'm not really sure how it started.

Last year, when I was running for the student position at my school for editor-in-chief of the student newspaper, I asked a good friend of mine to make a logo for me using the Panda. I've always liked the Banksy Panda, except for the guns. Though, one might argue that main comedy arises from the use of guns with an animal of such friendliness and cuddliness. So to capitalize on a well known image, I opted for the Banksy Panda, but added rolled newspapers instead.

Though I won the election and ultimately got the position, I had to turn it down due to other commitments that came up in the summer. Thankfully, the new editor-in-chief is awesome and took over where I started.

That said, this logo is still cool. I hope you'll like this as much as I did! Below is a version without the text: 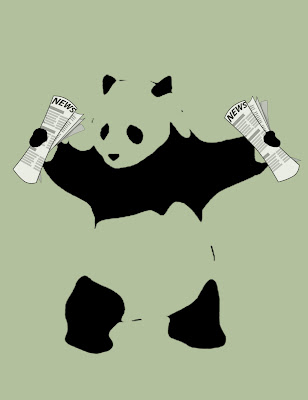