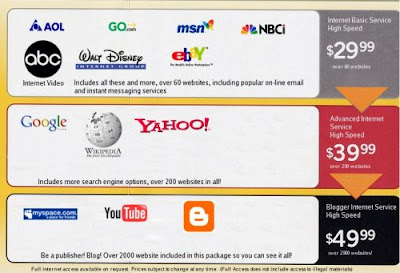 Feb 21, 2009--According to SaveOurNet, Canadian internet as we know might cease to exist after the next few weeks. On Monday, February 23rd, government will pass a new law that fully supports Canadian internet service providers in their bid to throttle the internet. The problem with throttling is this: it prevents the stream of information from certain sites from properly displaying on a consumer's computer. Throttling essentially acts like a filter and eventually may lead to a tiered internet system.

What's the problem with this? Well instead an equal-access clause, a tiered internet system will allow only major content providers with priority bandwidth rights while smaller businesses, independent music labels, and new innovative ventures will receive considerably less. In short, the internet may become like TV.

This is already happening. As I've written articles about a free vpn services (Hulu, OpenVPN) that creates and IP address in the United States, one commenter noted how services such as Rogers and Shaw prevented many users from connecting with those servers located in Englewood, Colorado. Thanksfully, Telus does not employ technology such as packet sniffing or throttling of any sort. For more information about throttling, net neutrality, and this current event, visit SaveOurNet.ca