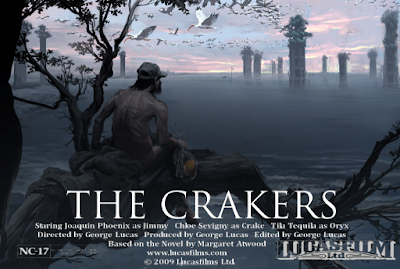 (artwork by Jason Courtney on Perdador)


At the University of British Columbia, I took a class on dystopic literature, ENGL 406. Here's an audio recording of a project I participated in. Each group was to give a presentation on a specific novel from the class. Ours was Margarent Atwood's "Oryx and Crake". [Edit: I played George Lucas. (forgot to say that!)]

We decided to design our presentation based on James Lipton's infamous Inside the Actor's Studio. For the full script, inspiration behind the project, and prior (cold reading) recordings, see the wiki at oryxandcrake.pbworks.com:

"As an alternative, perhaps we could put together an ensemble spoof of "Inside the Actors Studio" (or some derivative of it). This is where the famous interviewer, James Lipton, asks a series of pertinent questions to actors who portray certain characters in recent film projects (much like an interview on Jay Leno, Conan O'Brien, or David Letterman). Each one of us could take part in the Actors Studio in some way (depending on one's inclinations), write a short script, and produce answers to specific questions. It'd be very interesting to consider the difficulties of creating an Oryx and Crake movie, and so some one (say, playing the role of the director/screenwriter/producer) could also mention that."

For anyone not familiar with Inside the Actors Studio:
Honoring James Lipton
Will Farrel Spoof