Watch Divx On Wii (No Conversion)

UPDATE: Netflix is now on the Wii. Signup for the Netflix Wii CD here.

This tutorial demonstrates how to watch divx movies on the Nintendo Wii WITHOUT file format conversion.

After hacking your Wii for homebrew via the Twilight Hack, and installing the homebrew channel, download the application called MplayerWii (which allows user to watch divx movies natively). Do not confuse this, however, with Mplayer which plays only DVDs. MplayerWii plays all formats except DVDs. This hack is software-based and thus does not require hardware modification. If you haven't hacked your Wii yet, read Lifehacker's tutorial on Hacking the Wii for Homebrew Apps and DVD Playback.

Mplayer plays DVDs very poorly--it takes a considerable amount of time to buffer the video and audio codecs. As such it's still more convenient to play DVDs on your home machine than on the Nintendo Wii. Install Mplayer anyways to test DVD playback (it's required for testing IOS codecs). 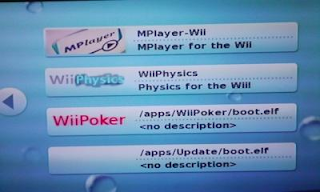 MplayerWii, on the other hand, allows one to watch videos in all popular file formats--the most useful of which is probably divx (.avi). The MPlayer's native port to the Wii has undergone several iterations thanks to the industrious coding of it's creator, Ron (of RonWarez). The newest file version as of this writing is 0.07. Keep in mind that the software is still in its earliest stages. Despite this, video and audio synchronization plays smoothly and wii controls have been quite intuitive. There are, however, some unofficial versions of the MPlayerWii application which feature youtube support, SMB playback, smoother dvix playback, and continuous song playback (plays all audio files in a folder).

To reiterate:
MplayerWii = Plays everything except DVDs
Mplayer = Plays only DVDs


Media
Files can be played via the SD slot, gecko, USB or the DVD drive. It does not matter where on the media the video file is placed since MplayerWii can browse media directories (including external hard drives). Just remember to format each media (SD card, USB drive, external HDD) in FAT format (Fat 12, Fat 16, FAT 32).

Installation Directions
1. Unzip the package into the "apps" folder on your SD card.
2. Place video and audio files on the root folder of your SD card.
3. Launch MPlayerWii through the Homebrew Channel.