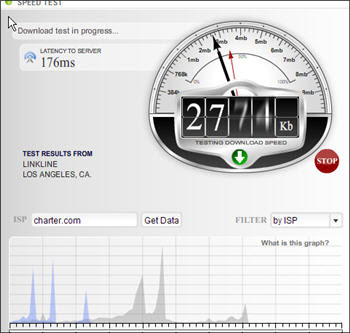 I decided to test the download and upload speeds of Hotspot Shield versus my current internet service provider, Telus. The package I'm using is 3Mbps aided with Open DNS server routing. Both were tested on Los Angeles servers provided by dslreports. Here's how the stacked up*:

Observations
Keep in mind that the speeds fluctuate throughout the day and the week. Even as service providers try their best to keeps speeds stable, it's still conditioned on a "best effort" basis.

As such, I caution against thinking about these speeds listed above as "recommended speeds" in order to use AnchorFree's Hotspot Shield VPN service, Hulu, or any other website that would require IP address in the states. Rather, think of these as speeds that are possible with a ISP and package in the range. Here, for example, HSS is a little over half the download speeds of my original ISP, Telus (on the 3Mbps High Speed Enhanced package) while the upload speed is very similar.

All in all, one's original ISP should be much faster than Verio's on Hotspot Shield (and conversely, HSS's speed is still limited by the package you choose with your ISP). After all, HSS requires the original ISP (in this case, Telus) to provide the backbone network for the vpn software. Even so, the Hotspot Shield VPN performed very well in this test, which at times can even rival Telus' speeds which happens occasionally during the latter ISP's peak hours of usage.

Interesting Information Hotspot Shield's ISP, Verio
The most interesting piece of information from this test would probably be the fact that HSS' ISP is now verified as Verio. According to Wikipedia, Verio has invested increasing sums of money into purchasing smaller ISPs all over the United States in a business model called "rollup", to combine all the smaller ISP entities in a larger national-scale ISP . As a result of successfully implementing the rollup strategy, Verio is today a consolidation of what was--at one point--200 separate ISPs. They were originally incorporated in 1996 in Denver Colorado; hence the reason HSS's IP address always turns up nearby, in Englewood, Colorado (Englewood is but roughly 6km from Denver's Metro area). The company was bought up by NTT (Nippon Telegraph and Telephone Communications in late 2000 for approximately 5.5 billion dollars, one of three communications companies operated by NTT. The Japanese government still owns roughly a third of the NTT's shares.

I'm interested in how your ISP stacks up against Verio's (HSS's ISP). Try out the test here on dslreports. Just click on a server with a low number of current users once with your original ISP and once while using Hotspot Shield. Hit up the comments with your results!
By Patrick Soon