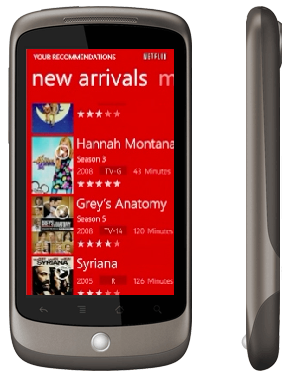 NFLX, a novelty account user on reddit.com recently noted that Netflix hired (and is still hiring) an Android Development Team at the company with plans to bring a Netflix app to Android. Since the Windows 7 phone will have a streaming app and Android is blowing up daily, it's only a matter of time until Android Devices such as the Google Nexus One and the Droid Incredible get a streaming app.
Here are some comments on the reddit AMA (ask me anything forum) by NFLX:

"I do know applications for Android are currently under development so hopefully there will be an option for Linux users some time after that." (link here)

"I just know we're actively hiring Android devs. I wish I knew more about a timeframe for you. Good things come to those who wait. Netflix is essentially a tech company and with the way Android is blowing up it would be stupid of us to ignore that." (link here)